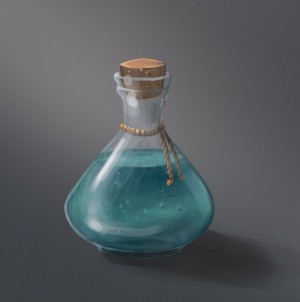 “Hey wait a minute,” Ava protested as Jenna put the pot on the stove. “I should be the one to make this potion! You’re not any good at cooking. You’ll do it wrong.”

“No I won’t! Making potions and cooking aren’t the same thing. Besides it was my idea and I’m in charge,” Jenna said.

Ava couldn’t argue with that point. “Okay, but if we have to call the fire department, it’ll be your fault, not mine.”

“Don’t worry, we won’t be calling the fire department. I promise,” Jenna said. She reached up to the cupboards and grabbed a bottle of extra virgin olive oil off the shelf and poured a good amount into the pot.

Ava peered into the pot, “Well, at least the potion has a healthy base.

“Watch the pot while I get the rest of the ingredients,” Jenna said.

“You’re supposed to have the ingredients to cook before you start cooking,” Ava said. “Mom always does.”

“Mom isn’t the expert on potion making is she?” Jenna asked.

“And you are? How many potions have you made before this?” Ava demanded.

“None,” Jenna said. “But I’m confident in my product.”

“You can’t be confident in something you’ve never tested!” Ava said.

“Why not? Positive thinking promotes success,” Jenna said with an air of superiority in her voice. She grabbed garlic, some shredded carrots, a ball of mozzarella cheese, two stalks of celery, some leftover baked beans from the barbecue dinner the night before, mustard and ketchup.

The sloppy substance was a good start but wasn’t enough. What else could she put in the potion?

“Go raid the herb garden and bring me back a handful of herbs.” Jenna said.

“Now? It’s night out. You can’t even see which ones you’re picking,” Ava protested.

“So turn the back porch light on. You’ll be able to see just fine,” Jenna said.

“Which ones do you want?” Ava asked.

Jenna thought about it. “Feverfew and dill at the very least. Pick whatever else you feel like would be useful.”

“Do I have to explain this whole process?” Jenna was getting exasperated as she stirred the potion. “Mom uses it for migraines. It might be painful to grow older. So that would help with pain since we’re doing it fast. And it will help him get sick less since it reduces fevers.”

Ava considered. “Okay. First thing you’ve said all night that makes any sense. I’ll get a basket and be back in a few minutes.”

Jenna was relieved when her sister left. She stirred the pot feverishly. It was a gloppy concoction and looked good, but not quite right yet. There were still things missing even besides the herbs. What was missing?

She left the stove to rummage in the refrigerator again and a dish caught her attention. It was a puke green color with clovers on it and a glass dish on top and some faded masking tape on top. It looked like it belonged to someone’s grandmother.

Jenna looked inside. The dish in the container was molding a little but the mold was useful for growth she’d learned in science class.

She opened the lid and wrinkled her nose. What a smell!

Even as she thought that the backdoor opened. Ava was back with a basket full of herbs. “Ewww, that’s gross, what stinks?”

“I don’t know, I can’t read the label on it,” Jenna showed her the glass cover.

“You can’t put that in there!” Ava protested. “You’ll make him sick.”

“Yes it does, all the time. People can die from eating mold that’s too old. Wash your hands and put that in the sink.” Ava said. “Good thing I stayed in here for this process.”

“All right, all right,” Jenna said.

“So what’s next in the recipe?” Ava said.

“And milk!” Ava was finally getting into the spirit of things. “Milk helps things grow.”

“Oh good idea! It’s not in the recipe but it will be a good addition,” Jenna grabbed the gallon of milk and sloshed half the container into the pot, while Ava got the broccoli and cabbage out of the freezer. The ingredients frothed and bubbled in the pot.

“This sure is going to be hard to swallow since it’s so chunky,” Ava said, peering into the pot. “What if he chokes?”

“I know just how to solve that problem,” Jenna said. She ducked under the counter and rummaged in the cabinets. As she did she found what she was looking for. The stick blender!

She’d seen her Dad use it lots of times. She plugged it into the outlet closest to the stove and turned it on high. “I think this will do, don’t you?”

“Yeah, that should make the chunky bits smaller.” Ava agreed.

Jenna put the blender into the pot and turned it on high. The noise excited her. She kept blending until the entire mixture had turned to mush. When she was finished she turned the blender off first before pulling it out of goop. She didn’t want to get sludge all over the kitchen.

“Wat sort of magic are we using?” Ava asked. “Do we have a spell to go with this?”

“Of course we do, I wouldn’t make a potion without having a spell to go with it,” Jenna said. “But, we have more than just a spell, too.”

“I can’t say it until the potion is ready,” Jenna said. “Otherwise it won’t work.”

“Fair enough,” Ava agreed. “So what’s the other thing besides the spell?”

“Radiation!” Jenna pointed to the microwave. “We’ll nuke the potion in there and say the spell at the same time and it’ll be perfect! Instant older brother!”

“What if it gives him super powers instead?” Ava asked, “Isn’t that what radiation usually does?”

“That’s only in the movies,” Jenna scoffed, “Besides, our spell will help prevent that. Oh! I almost forgot an ingredient!” She slapped her face with her palm. She grabbed a measuring bowl and thrust it at her sister. “Go grab some fertilizer out of the garage. Three cups should do.”

“Okay,” Ava grabbed the glass bowl and hurried out to the garage. Hrm. It was a new bag and too heavy to lift. She didn’t want to make a mess and Jenna needed the fertilizer quick since the potion was almost ready.

She glanced around the garage before finally spotting the garden clippers that their Mom used to trim bushes in the yard. She scooped up the three cups, making sure that she had just the right amount before she hurried back.

“What took you so long?” Jenna asked.

“The bag wasn’t open yet, so I had to find some scissors,” Ava said, handing her the fertilizer.

Jenna poured in the fertilizer and the mixture turned a nasty brown color.

“Now we let it reduce in the pot for ten minutes,” Jenna said, dusting the fertilizer off herself. “Then we nuke it in the microwave and say our spell.”